Writing is a passion I developed as a journalism major at the University of Georgia, earning an ABJ in Magazine Writing. Photography took over my life in the meantime, and it's only in the past few years that writing has re-emerged as a focus in my life.

A long time fan of mysteries by authors including John D. MacDonald, Randy Wayne White, and James W. Hall, my love of the genre has led to the Florida based "Will Harper” series.

Main character Will Harper lives on a 57-foot Grand Banks Trawler, much like MacDonald's Travis McGee lived on a houseboat. My own love of boats began with a 16-foot runabout and has lasted through four houseboats and a cabin cruiser. The Will Harper Novels have a social justice theme, tackling topics such as eminent domain abuse, jail/bail scams, opioids, human trafficking, pollution and senior citizen ripoffs.

I live in Land O Lakes, Florida, with my wife Marilyn, a retired Lutheran Pastor, and our
lovable Shih Tzu, Zoe.

PS - About my business name, Crosby Stills. Part of my commercial photography career included working as a stills photographer on feature film sets and TV commercial shoots. The director would finish the scene, then call out "Ready for stills!" I'd race into position to shoot in minutes what the film crew had sometimes spent hours setting up. I resisted using the Crosby Stills name for years, until in the mid-90's, when I needed a new website. www.crosbystills.com was available and the name easy to remember. It gave me an email address that I've had for more than twenty-five years. It was NOT an effort to capitalize on the band's famous name. I met Graham Nash at a photography conference in New York in the early 90's, and in later years met singer David Crosby after a concert in Asheville,NC. They were both very gracious, and "The Cros" signed my Crosby Stills business card for me. That's the real story. 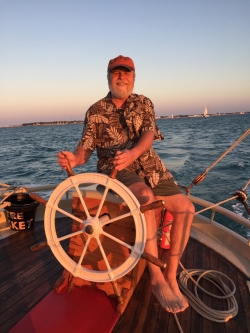 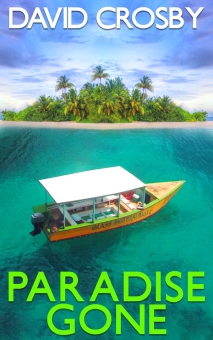 Paradise Gone
AN ENDANGERED FLORIDA PANTHER, A DEADLY
POACHER, AND A KID IN TROUBLE...

Hotshot Florida journalist Will Harper, known for reporting hard-hitting stories (and for living on a trawler), is quietly doing both those things when cans of worms suddenly explode in all directions.

His story-in-progress seems safe enough, even a bit predictable—it’s about overdevelopment killing Florida culture and wildlife. But when he contacts a wildlife photographer for information, he finds himself listening to a much more compelling yarn than the one he’s working on. The photographer and her assistant recently filmed a mother black bear tragically killed by a poacher in front of her cubs.

And then the poacher, carefully setting his sights on the humans, shot her assistant right in front of her.

Rushing to get help, she returned with the police only to find that both the wounded man and the bear’s corpse had disappeared. With no evidence, the cops declined to investigate

Enter the ever-quixotic investigative reporter—if no one else is going to look into this, Will sure will.

But his investigation is hampered by a new development that’s destroying his domestic peace and quiet. It seems his girlfriend neglected to mention she has a teenage daughter who’s hell on wheels and who’s now been to sent to live with her mom and Will—which means their once-peaceful trawler is now home to squabbling, tension, and teen-age angst.

So while Will is hellbent on trying to track down the missing assistant, he’s also got to keep this teenager from finding a way to get in touch with her psycho biker boyfriend. Watch the exceedingly nimble Will juggle his article on gorgeous (and disappearing) Florida culture, his investigation into the deadly poacher’s ghastly crimes, and his big-hearted attempts to keep the angry teenager from being kidnapped by the so-called “love of her life.”

All in a day’s work for this guy.

Jun 29, 2022 by David Crosby
It was a long year, but we finally finished the addition to our tiny house, affectionately known as Our Happy Place! Living amid the construction was a major distraction, but I also finished Will Harper #8, Paradise Gone. It's available on Amazon as of July 3rd, 2022. Hopefully book 9 won't take nearly so long.
Read More

Sep 14, 2021 by David Crosby
Will Harper is based in Palmetto, Florida, at a marina across the Manatee River from Bradenton. He lives on the Wanderlust, a 57-foot Grand Banks trawler. The SailFin Point Marina in the series is patterned after the Regatta Pointe marina in Palmetto, and has the real Riverhouse Restaurant. Many of the places and restaurants featured in the story are real, and I always try to have the characters ordering food from their menus. If you read of a meal that sounds great, go try it for yourself!
Read More
Created with Pub Site
Created with Pub Site